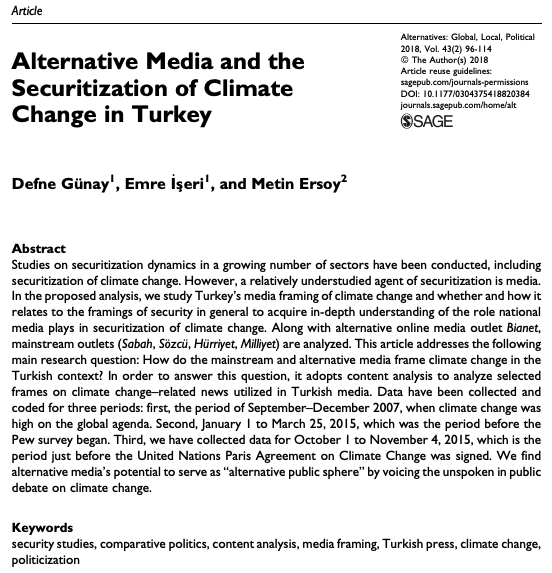 ‘Studies on securitization dynamics in a growing number of sectors have been conducted, including securitization of climate change. However, a relatively understudied agent of securitization is media. In the proposed analysis, we study Turkey’s media framing of climate change and whether and how it relates to the framings of security in general to acquire in-depth understanding of the role national media plays in securitization of climate change. Along with alternative online media outlet Bianet, mainstream outlets (Sabah, Sözcü, Hürriyet, Milliyet) are analyzed. This article addresses the following main research question: How do the mainstream and alternative media frame climate change in the Turkish context? In order to answer this question, it adopts content analysis to analyze selected frames on climate change–related news utilized in Turkish media. Data have been collected and coded for three periods: first, the period of September–December 2007, when climate change was high on the global agenda. Second, January 1 to March 25, 2015, which was the period before the Pew survey began. Third, we have collected data for October 1 to November 4, 2015, which is the period just before the United Nations Paris Agreement on Climate Change was signed. We find alternative media’s potential to serve as “alternative public sphere” by voicing the unspoken in public debate on climate change.’