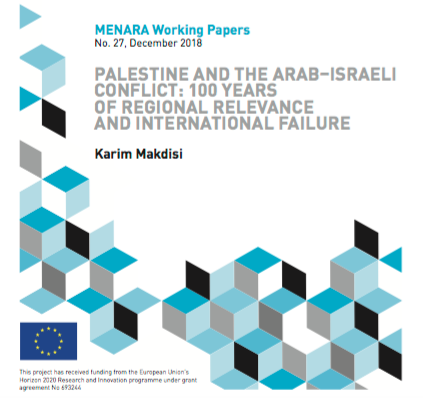 A new paper by Karim Makdisi and entitled “Palestine and the Arab–Israeli Conflict: 100 Years of Regional Relevance and International Failure” was published in MENARA Papers.

“This paper asserts that the Arab–Israeli conflict, and in particular the question of Palestine, has been the major issue of regional concern across the Middle East for over a century. It claims that the failure to resolve the question of Palestine will continue to impact on the region’s stability and its geopolitical dynamics and to shape popular opinion while limiting Arab leaders’ options. It first situates the Arab–Israeli conflict as a core regional issue in historical context – which is crucial for understanding where we are today – before critically reviewing the Oslo “peace process” and its failure to deliver a just and sustainable peace within the framework of a “two-state solution”. It suggests that this failure has resulted in the ramping up of lingering regional problems (e.g. southern Lebanon, the Golan Heights, refugees and in Palestine itself) and the rise of new challenges and frameworks (e.g. the Resistance Axis and the BDS movement). It concludes that the time has come for the international community – including the European Union, which has contributed to the failure of the two-state solution – to consider alternative paradigms and actions.”

See more about the paper here.