WORKING PAPER N°5 “Turkey, the Middle East and the EU integration process through the prism of ontological security theory” by Drakoularakos Stavros 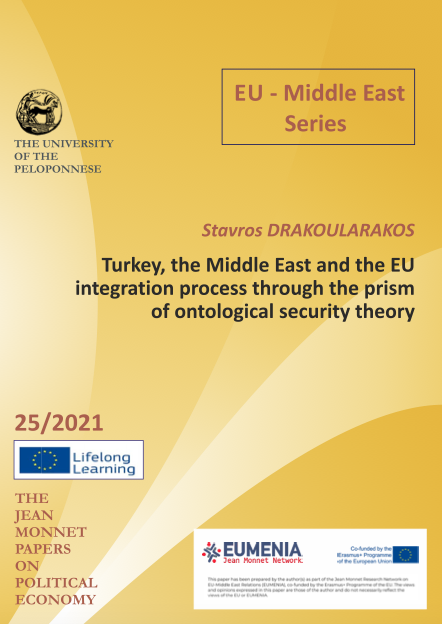 The working paper is part of the Middle East Series, The Jean Monnet Papers on Political Economy, of the Jean Monnet Center of Excellence of University of Peloponnese.

This paper aims to bridge the gap between the pausing of the Turkish European integration process and the gradual inflection of Ankara’s foreign policy to the Middle Eastern region through the prism of ontological security theory. The objectives are threefold: first, to present and illustrate ontological security theory as applied to state entities; second, to examine the Turkish European integration process through the tenets of the Kemalist foundational identity narrative; and third, to focus on the build-up and identity redefinition in the 2000s and 2010s in order to better comprehend the emphasis shift from the European Union to the Middle East.

The working paper is available here.