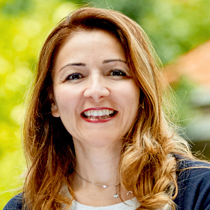 Dr. Münevver Cebeci is an Associate Professor at the Institute of European Studies (former European Union Institute – a Jean Monnet Centre of Excellence), Marmara University in Istanbul. She also worked as a Senior Researcher at the European Neighbourhood Policy Chair, College of Europe-Natolin in April 2016-April 2017 for contributing to the MEDRESET project, financed by the European Union in the framework of its Horizon 2020 programme. Prof. Cebeci has taught several courses, including “European Foreign Policy”, “Security Studies” and “International Relations Theories” since 2001. Her course “International Politics of the EU” was awarded as a “Jean Monnet Permanent Course” by the European Commission in 2002-2007. She gave guest lectures at various universities, including Bilgi University-Istanbul, Bilkent University-Ankara, the College of Europe-Natolin, and Canterbury Christ Church University, Université Libre de Bruxelles, and is a former visiting fellow of the WEU (now, the EU) Institute for Security Studies. She holds a PhD in EU Politics and International Relations from the European Union Institute, Marmara University, an MSc in International Relations from the London School of Economics (as a Jean Monnet scholar) and an MA in International Relations from the Social Sciences Institute, Marmara University. Her research interests include European Foreign Policy (especially the Euro-Mediterranean Partnership and European Neighbourhood Policy) and Security Studies. She has published two books and numerous scholarly articles in journals and edited books. Her latest book Issues in EU and US Foreign Policy (an edited volume) was published by Lexington Books in 2011. Her forthcoming book De-Constructing “Ideal Power Europe”: The EU and the Arab Change is in the process of publication by Lexington Books. Among her publications are: